Sometimes the language of the Bible strikes our modern ears as very impolite, insensitive, rude, intolerant, etc. In particular, the way the Bible speaks of false religions sounds very offensive to those of us raised in a pluralistic culture in which we're taught to value other perspectives and the value of other people's religious views. Here's a sampling of a few verses:

Leviticus 17:7, "So they [the Israelites] shall no more sacrifice their sacrifices to goat demons, after whom they whore. This shall be a statute forever for them throughout their generations." This statute is given in the context of setting up the cult of Yahweh - the priesthood, the sacrificial system, etc., and is probably a reference to worship of certain Egyptian goat gods. 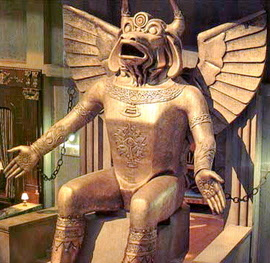 Deuteronomy 32:17, "They sacrificed to demons that were no gods, to gods they had never known, to new gods that had come recently, whom your fathers had never dreaded." This comes in the form of a prophecy by Moses - when Israel the Righteous (Jeshurun) gets fat (prosperous) they will forsake God, scoff him, anger him, provoke him to jealousy, by worshiping false gods. The false gods are referred to as 'strange gods', 'abominations', 'demons', and 'no gods'. This prophesy obvious came true as Israel whored after Baal, Asherah, etc. (see also Psalm 106:34-39).

1 Corinthians 10:19-22, "What do I imply then? That food offered to idols is anything, or that an idol is anything? No, I imply that what pagans sacrifice they offer to demons and not to God. I do not want you to be participants with demons. You cannot drink the cup of the Lord and the cup of demons. You cannot partake of the table of the Lord and the table of demons. Shall we provoke the Lord to jealousy? Are we stronger than he?" Paul closely connects the pagan religions of the day, religious like the cult of Apollo and Aphrodite and the Imperial cult, with the worship of demons. It's easy to think demon seeing a statue of Molech (above), but the beauty of the ancient Greek and Roman gods makes it less obvious.

1 Timothy 4:1, "Now the Spirit expressly says that in later times some will depart from the faith by devoting themselves to deceitful spirits and teachings of demons..." Here it seems like the 'teachings of demons' is larger than just false religions and would also include secular, anti-Christian philosophies.

Revelation 2:13, “I know where you dwell, where Satan’s throne is. Yet you

hold fast my name, and you did not deny my faith even in the days of Antipas my faithful witness, who was killed among you, where Satan dwells." Here, Satan's throne/Satan dwelling probably refers to the cult (religion) of Zeus Sotor, Asklepsios and/or the Imperial Cult of the Caesars.

Revelation 2:9, “I know your tribulation and your poverty (but you are rich) and the slander of those who say that they are Jews and are not, but are a synagogue of Satan." Here the 'synagogue of Satan' refers to Jews who had rejected Jesus and were persecuting the early church (this verse has often been misused to promote Antisemitism).

Revelation 9:20-21, "The rest of mankind, who were not killed by these plagues, did not repent of the works of their hands nor give up worshiping demons and idols of gold and silver and bronze and stone and wood, which cannot see or hear or walk, nor did they repent of their murders or their sorceries or their sexual immorality or their thefts."

This is a side of our evangelistic efforts I think we often forget. From the ESV Study Bible notes on 1 Corinthians 10:20, "False religions are not merely the result of human imagination and human energy but generally have demonic power behind them." Even when we aren't in conversation with someone who claims to be an adherent of a religion, they are. Everyone has a religion - be it one of the formal recognized religions or the naturalistic, materialistic philosophy that predominates the American landscape today. Everyone worships!

I think the verses quoted above should remind us that 1) it is a spiritual battle, 2) people have been blinded and need to have the veil lifted by the sovereign grace of God. Christopher Wright makes a few really astute observations in his book the Mission of God. In the chapter entitled "The Living God Confront Idolatry", Wright points out that when Paul speaks to Christians he pulls no punches, placing idolatry squarely in the category of 'things which incite God to anger', 'folly', etc. Yet, drawing on Paul's actual conversation with pagan idol worshipers (Lystra, Acts 14; Athens, Acts 17, and Ephesus Acts 19), Wright argues, "[Paul is] forthright and uncompromising, but markedly softer and more polite than the language we observe in Romans 1...In both places [Lystra and Athens] he allows that God has been patient and tolerant of pagan ignorance in the past. But in both he also calls for a decisive turning away from the worship of 'worthless things'...[In Ephesus] we also learn most interestingly that Paul had not engaged in any specific defamation of Artemis/Diana - the patron goddess of Ephesus...Clearly Paul's evangelism was uncompromisingly effective but it was not calculatingly offensive...Romans, written to Christians, highlights the wrath of God. Acts, referring to speeches made to pagans, highlights God's kindness, providence and patience. Both, however, insist on God's judgments."

I think Francis Schaeffer was a great model of this. When dialoguing with people who held philosophies or religious beliefs that were false (and I'm sure Schaeffer would have acknowledged, demonic), he still looked for a point of contact. Humans, probably as a reflection of the image of God that still resides in us, are reluctant to swallow whole lies. Consequently, Satan mixes truth and lie and sells it to us as a pill we can swallow - to our destruction. Schaeffer was great at pointing out the truth in a system and would say, "Yes, that's true, but it doesn't go far enough," or "That's true, but here's where you steer wrong and here's where your wrong turn will take you logically." I know his efforts were bathed in prayer as he understood it wasn't just with faulty logic or false belief he was contending, but with demonic power animating false belief and blinding the devotee. 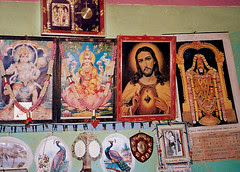 At another level of application, these verses should sound a note of great warning against any kinds of syncretism. Studying the seven churches in Revelation shows how often the church has been in danger of syncretism, of blending the worship of God with the worship of or service to idols. But Jesus will have none of it. The truth of God in Christ and true religion as revealed in the Bible cannot be mixed with the lies of demons.
at 10:30 AM