Over the past few days, I have seen a few disturbing Facebook posts about Christian's slaughtered in Nigeria and the Philippines. Of course, as a Christian and, frankly as a human, I am deeply saddened by this. But, these posts have been rhetorically dishonest and so devalue and dishonor those who have died.

The reports are not usually posted with a simple "this is sad, we should pray and remember Christians who live in hard places and have their lives taken from them." No, instead it's, "the media is falling all over themselves to report the massacre in New Zealand, but nary a word about the slaughter of Christians in Nigeria and the Philippines."  It's a rhetorical trick attempting to demonstrate that the media ("the left wing media") doesn't care about the plight of Christians. Problem is, the facts are very wrong. 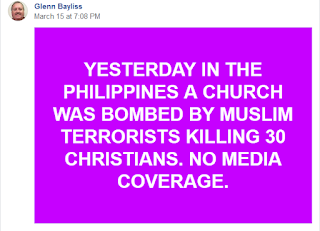 First, consider what is being spread regarding the bombing in the Philippines; the following post is an example. This was posted on March 15th, shortly after the New Zealand mosque killings.

Indeed ISIS terrorists did attack two Catholic churches in the Philippines and killing at least twenty, wounding dozens. But this attacked happened in late January (not, as the post implies, in mid-March). And, the tragedy was covered by media when it actually happened, including CNN, Fox, NYTimes, BBC, Reuters and many more.


The killings in Nigeria are different, more complicated. The posts that have been circulating, often referencing a Breitbart headline, claim that Muslim militants have killed more than 120 Christians in Nigeria. Again, this is a mixture of truth and error. The numbers vary from agency to agency, but 120 is very likely. However, this is part of a larger feud between farmers and herders that is raging in Nigeria currently. Muslim nomadic herders (Fulani) have been in conflict with the ethnically Christian Adara people in Nigeria. Many on both sides have been killed. In February, Adara gunmen, in response to an attack by Fulani, targetted Fulani settlements and killed at least 130. In March, yes 120 Christians, or more, were killed as a part of this conflict. It's ugly. It is war. Which makes it categorically different than a white supremacist walking into a mosque and killing fifty, wounding more.

The Christland shooting has received more attention than either of the other two events. I don't doubt that, but it seems completely understandable too. There is a 'first world bias' to events we read about or hear about from the media. A factory fire that kills 20 in Bangladesh won't make the news. Same fire in Chicago or Londo will. And, this kind of violence isn't expected in New Zealand, but we have become somewhat calloused to it in other parts of the country. A gangland shootout killing three or four people won't make the news if it's in Chicago or LA. If it's on the streets of Cape Cod or in Disneyland it would.

Let me be blunt, misrepresenting these horrific events to make the point that Christians are ignored by the media is dishonest. It is, in terms of the Ten Commandments, bearing false witness. And, it dishonors the dead - they aren't tools to be used in your war against the media. Shaping public opinion by using false data is, at best, manipulative. It feeds the "us vs. them" mentality that is doing so much harm in our nation and across the globe. Please stop.
at 7:23 PM